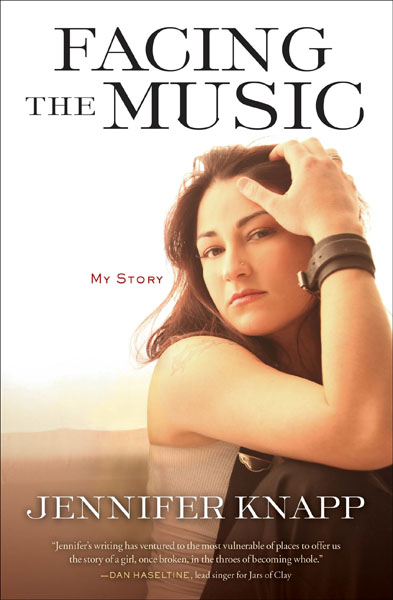 Jenifer Knapp’s long-awaited memoir has arrived in the form of her new book, Facing the Music. It’s a must-read for everyone who’s been speculating about her life during the last ten years, and it’s filled with useful discussion about Christianity and homosexuality.

For those of you who don’t know, Jennifer Knapp was dominating the Christian Rock scene when she simply disappeared in 2002 and left no trace. Fans were scratching their heads when tour dates and new albums ceased to be announced.

It was widely whispered that she was a lesbian and had run off with a woman. Others claimed she was no longer a Christian. (Some truly imaginative people combined those two rumors.) Years went by with no news; she may as well have been abducted by aliens.

The silence broke a few years ago when Jennifer Knapp came out of hiding and announced that she was, indeed, a homosexual who shared her life with a woman, and that she had certainly not left her faith. (Knapp kept out of sight by hanging out in Australia.)

The entire story is told in Knapp’s straight-forward autobiography, Facing the Music. Knapp tells us about her early life and gives a unique, behind-the-scenes glimpse at the Christian music industry. Christian artists face all of the normal trials that make rock stars burn out and need therapy, but they also face constant scrutiny of their spiritual lives from the peanut gallery of online comments and rumors. The stressful situation of being a high-profile Christian is rarely met with compassion; instead, fans expect inhuman perfection from their stars.

Of course, Knapp’s sexuality is the question on everyone’s mind. Facing the Music gives us a moving tale of the pressure Jennifer Knapp faced as she was expected to avoid being a lesbian even though she had never been attracted to men. This is obviously the part of her book that will ruffle the most feathers, but it’s a story that needs to be told.

I was fortunate enough to be at her book reading in Nashville, last week, when Facing the Music was released. (While I was there, I learned that if you sit on the wrong side of the room the microphone stand will get in the way of your pictures.) My favorite thing about Knapp was the way that she refused to make enemies of people who disagree with her. She told us how Christians have asked her to leave her gay lifestyle while those outside of the church think she should abandon Christianity; this tension places her in a difficult position. But rather than take sides and treat homosexuality as an “us vs. them” debate, Jennifer Knapp endeavors to keep the conversation open to all sides.  She does not shun someone for having a different opinion, and her book is an effort to tell her side of the story to everyone.

Facing the Music is a book I highly recommend because it provides an honest and kind discussion of what it’s like to be a homosexual in a Christian culture. Order it here. Also, you can read a portion of it for free. Homosexuality and the Church is an important discussion, and I’m glad Jennifer Knapp is telling her part of it.