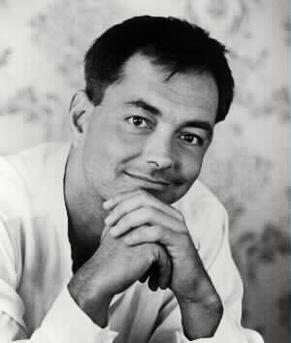 Note: This blog post originally appeared at ChristineHand.com as part of an ongoing series of cover versions of influential songs and artists. See the original post and accompanying video here.

When I was 9 years old I had a pastel pink and purple bicycle, which I would ride around my block all summer long to my neighboring friends’ houses. I also had a little off-brand walkman, and I can distinctly remember listening to my cassette of Rich Mullins’s The World as Best as I can Remember it, Vol. 1 while cruising over the gravel roads on my way home to dinner. The year before, we had gone as a family to a Rich Mullins concert, and, though I fell asleep for part of it (much to my regret today), I remember being fascinated. He was promoting his new record (the aforementioned World vol 1) and that night we heard “Step by Step” and “Boy Like Me, Man Like You,” which would soon become CCM radio staples. That Christmas, I found Rich’s new album along with Amy Grant’s Heart in Motion in my stocking. We put Rich in the cassette player in the big living room stereo and we were transfixed by the album’s cinematic opening and the use of a child — like me —  to sing the first track. I was a new super fan.

Rich died when I was in high school, and I began to listen to his music with fresh ears. As a kid, I liked the quirkiness of songs like “Boy Like Me Man Like You” and “You Gotta Get Up (It’s Christmas Morning.)” Like every good evangelical church kid growing up in that time, I knew all these goofy hand motions to “Awesome God,” and I knew how to do the cup routine to “Screendoor on a Submarine.” (Kids today don’t know that Rich wrote the original cup song!) But as a young adult, I began to move past Rich’s cheesy side and recognize his incredible songwriting. Rich helped me voice struggle and doubt and uncertainty. He talked about the wide range of human experience in the context of a grand gospel story. He was intensely personal, yet steeped in scripture and poetic integrity. Yes, he was often cheesy, but now I can see that the leap from awful to amazing is often a small one, and any artist has to be willing to risk one in order to make the other.

Today, many of Rich’s recordings sound so dated by those synth-happy days that it’s hard to overlook the production style and hear the songs themselves. I had that problem as a kid. I must have played through The World as Best as I Can Remember It a thousand times, but somehow, I missed its moody reflection on lost love, “The River,” and its joyful meditation on divine revelation in nature, “Calling Out Your Name.” I was too distracted by the other tracks’ flashiness, and too young to understand the other songs’ subtlety. When I rediscovered these songs as a grown up, they became central to my continued Christian faith. “Calling Out Your Name” especially provides a vision of God in creation and the coming recreation that has called me back from doubt many times:

In the place where morning gathers
you can look sometimes forever ’til you see
what time may never know
what time may never know:
how the Lord takes by its corners
this whole world and shakes us forward and shakes us free
to run wild with the hope,
to run wild with the hope —
The hope that this thirst will not last long
but it will soon drown in a song not sung in vain.
I feel the thunder in the sky,
I see the sky about to rain,
and I hear the prairies calling out your name.

In the midst of suffering and horrors, beauty still exists. And that beauty tells me something. Sometimes it only whispers, but it always speaks to me — in the rain, in the golden Texas prairies, and, very often, in music that calls me back to belief in a good God and a hope that all will be made well.