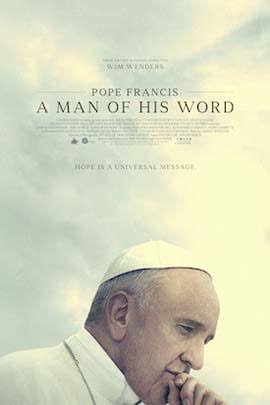 Last Tuesday, I took time out on a work night to go to the movies and watch a documentary about the Pope. (I know. I really know how to party). But in the midst of such hopelessness in the news, I needed some hope, and I walked away from Pope Francis: A Man of His Word with exactly that. As I considered the Pope’s life and message, I couldn’t help but take away some lessons — not only for myself, but also for the most prominent leaders in the evangelical world. Here are five ways evangelicals might learn from Pope Francis, especially as he is revealed in the new film.

If one theme shines out among the others in Pope Francis: A Man of His Word, it is that of the need for dialogue among people from diverse viewpoints. Francis reminds us that his namesake, St. Francis of Assissi, was known as the “apostle of the ear.” So Francis encourages people from differing backgrounds to start a dialogue by opening their ears to one another. He then models this listening stance himself. It is his listening ear that leads him to value the voice of women in the church, to hear the heart of a God-seeking believer in a gay parishioner, and to participate with leaders from other religions in the kinds of meetings and projects that contribute to common understanding. Too often in recent days, evangelical leaders have been quicker to speak than to listen, with the result of greater division within evangelicalism as well as greater division of evangelicals from other groups. In Pope Francis: A Man of His Word, the Pope actively seeks to build bridges instead of walls.

This one will sound strange to evangelicals, especially given the word “evangelical,” right there in our name, but in this film, Francis specifically shuns proseletyzing non-Christians in favor of building common community with them. Now, Francis is not anti-evangelism. His “Evangelii Gaudium” exhorts Christians to “embark upon a new chapter of evangelization marked by…joy.” But in the film, he makes a specific point that our interactions with people of other faiths should have no trace of proseletyzing. Instead, Francis provides a living image of Christ’s love as he prays for, listens to, and washes the feet of non-Christians.

Compared with the “Onward Christian Soldiers” stance of many Evangelicals, the value in a more humble approach becomes clear. For example, in 2009, Paige Patterson launched his “taking the hill” initiative at Southwestern Seminary — a program that entailed door-to-door personal evangelism in the areas surrounding his seminary. That doesn’t sound bad on its surface, but Patterson’s approach was explicitly confrontational. The seminary’s own website describes it this way:

Dressed in camouflage and stationed as gunner in a Chenowth Desert Fast Attack Vehicle, President Paige Patterson stormed onto the chapel stage at Southwestern Baptist Theological Seminary, Sept. 3. After firing a round of blanks from a .50-caliber Browning machine gun, he took his place behind the pulpit and initiated operation “Taking the Hill.”

Patterson later qualified his violent metaphor with some talk of “weapons that bring joy,” but the entire initiative was fueled by a war-like, confrontational, fear-mongering stance. It’s a sharp contrast to the image of Pope Francis down on his knees in front of a convicted criminal or a Muslim woman, bathing and kissing their feet. Francis leads with humility and service in order to win people with kindness and love for the sake of the common good.

Speaking of common good, one of Francis’s major platforms is taking care of the environment. Borrowing from his sainted namesake, Francis calls the earth “sister” and “mother.” In his encyclical, “Laudato Si’,” he calls on all Christians to care for the earth “not only because God has entrusted the world to us men and women, but because human life is itself a gift which must be defended from various forms of debasement.” He then extends his challenge to all humanity, recognizing that our environment is “a common good.” This message of environmental care takes a starring role in the new documentary, as Francis’s words are juxtaposed with images of environmental degradation.

I don’t mean to suggest that evangelicals do not care about the environment at all. But many of our most prominent evangelical leaders have made political alliances with those whose policies support economic gain over ecological care. Those economic consequences of environmental exploitation form the core of Francis’s call for Christians everywhere to steward the earth well. Time and again, he criticises a culture of wastefulness that leaves the poorest on the planet to pick through the leftovers (literally — one of the more striking scenes is of a group of poor people sifting through a landfill to find scraps to sell). The poor end up with the worst consequences of environmental ruin, and for Francis, that human impact is the most compelling reason to care for the earth.

Because of the exploitation of the poor inherent in a wasteful culture, Francis promotes the idea of a “poor church for the poor.” In other words, he calls on Christians and church organizations everywhere to live more simply in order to use their wealth to help the poor. Francis embodies this belief with his own frugal living. One amusing example in the film occurs on his trip to the United States, where his tiny, energy-efficient vehicle is dwarfed by the giant SUVs sent to escort him.

Now, I have to say that there are many excellent organizations run by evangelicals that do wonderful work with the poor, and many local churches pour out their money and time on behalf of those in poverty. In my years as a Baptist, I’ve seen firsthand how generous Evangelicals can be toward those in need. Nevertheless, I have also seen Evangelicals resist movements to help the poor that do not also include explicit evangelism. And larger movements to help the poor, such as the “social gospel” and “social justice” movements sometimes prompt suspicion from evangelicals. Because those who champion social justice tend toward liberal politics, some evangelicals also suspect them of liberal theology. In one extreme case, a Southern Baptist pastor in Texas has asked the Southern Baptist Convention to consider a resolution “to reject social justice as ‘evil.’”  While I believe that pastor to be an outlier, his attitude suggests a greater concern for power than for the poor. Francis’s words and example surely call evangelicals to take a close look at their own priorities.

In Pope Francis: A Man of His Word, Francis issues a strongly-worded policy of zero tolerance toward sexual abuse in the church, calling such abuse even worse than murder because of the way the victims have to live with such pain their whole lives. Francis’s track-record on seeking justice for sexual abuse victims in the church is not spotless, but he has publicly admitted his errors and taken action to make amends.

In light of the evangelical church’s own #metoo movement and the recent controversies surrounding Bill Hybels, Paige Patterson, and others, Francis’s response provides a helpful model. First, Francis is not afraid to publicly admit errors in judgment. Second, he listens to victims and expresses unqualified compassion toward them. Third, he commits to changes that will lead to zero-tolerance toward sexual abuse from clergy. I pray that he will follow through on such changes and bring healing to those who have been hurt and work to prevent future abuse.

I’ve known many godly evangelicals in my life. In the churches and organizations I’ve been part of, I’ve gotten to know leaders who embody the humility, compassion, and care that Francis does here, and who also teach the theology of environmental and cultural stewardship and of caring for our common good. But because evangelicalism lacks a centralized power structure, those leaders who become most visible tend to be those most interested in political influence. That quest for influence often comes at the cost of the gospel. We know that those prominent figures do not speak for everyone, but since they have attained a position of influence, it is my sincere hope that they would learn from Francis’s example.