Four years ago, after Donald Trump won the presidential election with the majority support of the evangelical community, I remember thinking that perhaps Trump’s presidency would serve as a wake-up call to the church. I saw the religious right’s commitment to certain political outcomes over kingdom ones as idolatry, and I hoped that Trump’s presidency might open their eyes. Four years later, I don’t know how many eyes have been opened. However, I have seen a rise in productive conversations about politics and policy among evangelicals. One of the latest contributions to that conversation is Kaitlyn Schiess’s new book, The Liturgy of Politics: Spiritual Formation for the Sake of Our Neighbor. No matter what happens in this election, I highly recommend this book to Christians of all political backgrounds who want to think more deeply about the relationship between politics and faith. 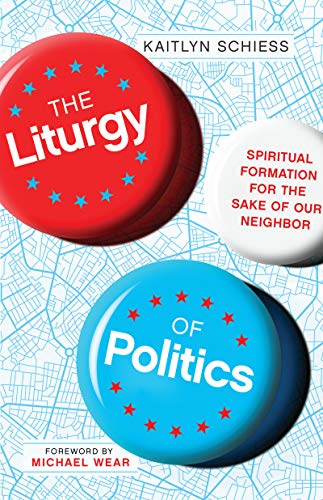 The Liturgy of Politics is built around the premise that our cultural and communal habits have the power to shape us spiritually, and vice versa;  our personal and communal spiritual practices have power to shape us in a corrective direction — the direction of Christ’s kingdom. For Schiess, our political practices have the power to reorient our loves and our loyalties; though we may believe that we have separated the political from the spiritual, often our political beliefs can affect our spiritual beliefs.

Schiess identifies four false gospels that have arisen out of misplaced political loyalties among American Christians: the prosperity gospel, which views wealth as the reward for righteousness and poverty as the punishment for sin and is grounded in the “American Dream;” the patriotic gospel, which equates America’s founding and success with the founding and success of the kingdom of heaven, often misusing scripture about Israel to support this view; the security gospel, which values personal and national security over hospitality and justice; and the gospel of white supremacy, which explicitly and implicitly values white people over people of color, sometimes supported by bad interpretations of scripture, but more often simply embedded into the practices of our largely segregated church congregations.

But Schiess’s main goal is not to criticize the church. Most of her book is dedicated to positive steps Christians can take, individually and in their churches, to prioritize Christ’s kingdom over any political alliances while still engaging in politics for the common good. Importantly, Schiess does not believe that Christianity is apolitical. Some of her most fascinating insights concern the ways early Christianity challenged the political realities of Rome. She paraphrases an early Christian apologetic describing the confusing contradictions of an early church community that was both part of ordinary society, yet deeply distinct from it: “They marry and have children but do not discard unwanted infants. They share meals but not wives. They obey the laws, and yet they surpass them in their goodness.” (60-61) To put it in familiar terms — they were in the world, yet not of it.

But the particular ways in which the early church was not of the world provided a direct challenge to the ways of the world they inhabited. For example, the early church completely disregarded expectations of social hierarchy and power. Instead, they “welcomed the most vulnerable and marginalized society” to a common table. They also challenged the misogyny engrained in Roman life: “In a society where Roman men often pressured women to get dangerous abortions and let female infants die of exposure, the Christian community created lower mortality rates for women because of a different social ethic that valued the contributions of women — single and married — for the good of the community” (62).

Schiess encourages the modern to church to shine that same perplexing light in today’s world. And her prescription is not to side with a particular political party; instead she asks us to reexamine our personal and communal worship in order to see how those practices may be shaping us either toward those false gospels or toward the coming kingdom of heaven. She examines the ways our understanding of the sacraments, the church calendar, fasting and scripture reading, our view of the end times, and even our music and programming choices can orient us either toward self and individualism or toward community and the larger kingdom.

One small example stands out. In advocating for the countercultural effects of following the traditional church calendar, she writes,

A church more formed by a national calendar than a Christian one may rejoice in a miraculous birth, but it will not have space for a crucifixion — or the self-denying ethic the resurrection were justify. If our churches were as marked by all stages of the church calendar as we are by the single consumeristic pull of Christmas in the Western world, perhaps we’d be less triumphalist, less concerned with putting on appearances of success and wealth, and more aware of the deep comfort our faith offers to the suffering. (120)

Some readers may feel wary of “The Liturgy of Politics” at this point. It may sound as if Schiess is picking on Republicans more than Democrats or elevating liturgical, high church traditions over more spontaneous, Spirit-led traditions. Though Schiess acknowledges that the religious right’s fidelity to Republican politics was a key motivator for this book, she does not single out Republican policies as bad or Democratic policies as good. Instead, using examples from both parties, Scheiss attempts to speak across party-lines, to particularly Christian interests common to Democrats, Republicans, and everyone in between. Similarly, though Schiess admits her partiality toward the high-church traditions, she tries hard to include Christians of all denominations in her examples and ideas for positive change.  Her goal is to empower Christians of all denominations and party preferences to learn to dwell in the tension of an already-not-yet Kingdom, to seek Shalom in the here and now even as we await its fullness in the future.

Whatever the outcome of this presidential election, all Christians owe it to themselves and to each other to take stock of their political loyalties in light of religious conviction, to approach the political arena in humility and love, and to find ways to heal the political divisions within our churches in unity around a higher kingdom. Schiess’s The Liturgy of Politics provides an excellent first step in that journey. In this fraught political climate, Kaitlyn Schiess reminds us that the kingdom of God is “righteousness, peace, and joy in the Holy Spirit.” This book hopes to bring that righteousness, peace, and joy to earth today, not through a particular political party, but through humble engagement with politics born of discipleship in the rich Christian traditions that orient Christ-followers toward Jesus’ counter-cultural kingdom of love.

You can buy The Liturgy of Politics at Amazon, but if you’d like to support small business during these trying times, I recommend purchasing from Hearts and Minds Books.